AfricaCom Q&A: Enabling cross-industry cooperation and the future of AfricaCom

James Wiliams from Informa Tech and TechAfrica News discuss the first in-person AfricaCom edition since 2019 and the future the Africa Tech Festival.

So this is the first time that we have met in Cape Town after three very long years. So how do you feel that Africa Tech Festival is going so far?

We’re probably about halfway through now on the third day of the event and it’s been fantastic so far. We’ve had a record 22,000 registrations and we had about 9000 people on site yesterday, which again is around 2019 levels. So it’s fantastic to be back, and have those face-to-face conversations, it’s still buzzing now.

What is one aspect of the show that really stood out for you so far?

We’ve had a record 22,000 registrations and we had about 9000 people on site yesterday, which again is around 2019 levels. So it’s fantastic to be back!

So again, it’s probably just being back. Just a buzz of being back and kind of having a lot of those conversations around the event. But we’ve also added lots of new content. So a single stream, a single session, or a single part will be difficult. We obviously had the party last night that’s a huge part of it. Really this event is a celebration of African tech. It’s not just about the content, it’s not just about the people. It’s bringing everybody together for a celebration. So we’ve also launched some new streams, and some new content. There’s a “Telecos of Tomorrow” stream that we’ve never had before in the live setting. Lots on cybersecurity and other verticals that are integrating digital and disruptive tech.

Do you think that these types of events are important to enable the industry to talk to each other? Is it making an impact on the communications industry? How do you see it?

We hope so. All the feedback that we have is that it does make a difference. Our job really is as a forum. It’s bringing people together to meet, to do business, to change the way they’re doing things, and to educate. We’re also quite a broad event and we cover a whole continent of 54 countries and we try and cover all the different industries within that. Our content as the backdrop is quite broad and really our job is, as I say, to bring people together and help host those business conversations and that education for the industry.

And if you see the press releases going out and some of the business deals and agreements that have already been made, I hope so. And then another big part of the event is the AHUB, which looks at startups and SMMEs, and kind of burgeoning small businesses. If you look at the investment that’s been made from 2019 was a record year for investment, 2020 was a record year for investment, and then 2021 beat them both. The metric for 2022, we’ve got maybe a month left of the year, a month and a half left, and it looks like it’s going to be beaten again. So all the signs are really positive!

Have you had any interesting feedback or interesting stories from the startups here this year?

Definitely. As we do every year, the AHUB stage is still running, so the content is still going on Wednesday. We had the mayor talking, the mayor of Cape Town, and he obviously talked about the silicon cape and all the work that they’re doing to invest and enable startups. He shared some statistics, and on the competitive side he’s talking about Cape Town beating Nairobi and Lagos, the other big tech hubs on the continent. Startups are also the bedrock of the next generation. If you look at the statistics of how many businesses are startups, it’s over 90% in pretty much every country on the continent. So enabling that is a huge part of it, and for the next year and beyond, we’ve got plans to rebrand and relaunch the AHUB as well. Expect some big things for the future.

Our job really is as a forum. It’s bringing people together to meet, to do business, to change the way they’re doing things, and to educate. We’re also quite a broad event and we cover a whole continent of 54 countries and we try and cover all the different industries within that.

We kind of started my last question, I was just going to ask you, what are your plans for next year? So, apart from the AHUB and rewind of that, what else should we be looking at for next year?

The AHUB launch is a big part of it. Telcos will continue to be a central part of everything we do as they are to the wider industry. We want to grow Africa Tech as well. So Africa Tech was launched in 2018 to cover disruptive technologies across enterprises on the continent. Again, a massive, massive part of what the continent does and how it’s going to transform. For the future as well, we’d love to launch a ministerial summit. You listen to the conversations that happen around the event. There’s constant talk about the regulation and how just by its nature, the speed at which the tech environment moves, regulation always is playing catch up, so that’s a critical part as well. So our goal in the future is to also launch a ministerial summit and bring ministers from across the ICT ministers, transport ministers, and education ministers from across the continent to convene in one place at the Tech festival to talk about the political, and regulatory frameworks. And yesterday we had the deputy Minister for the Department of Communications and Digital Technologies for South Africa. And yes, I really want to formalize that, make it a bigger part of the show and what we do.

Stay up to date with all AfricaCom insights and details for AfricaCom 2023. 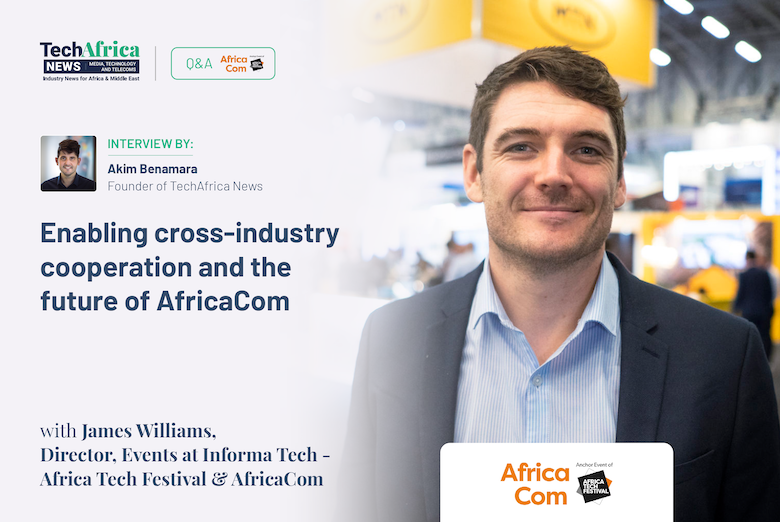